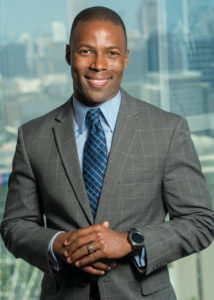 One evening about three years ago, Corey Ferguson was at work at T. Dallas Smith & Company LLC, when its founder, president, and CEO, T. Dallas Smith, called him into his office.

“After our small talk, he stated he was proud of what I had done,” said Ferguson, who is the 2020 Atlanta Commercial Board of Realtors President’s Award winner.

Smith went on to offer Ferguson the opportunity to become a principal of the company.

“It was a very emotional moment for me,” recalled Ferguson, principal and vice president at the company. “Enthusiastically, I said yes. I was itching to get home to my wife and say, ‘look at what we have accomplished.’ For a young black kid from Montgomery, Alabama, to stand up with broad shoulders and look at my three children and say, ‘Daddy is part-owner of a commercial real estate company’ was an exciting, humble moment in my life.”

Ferguson’s successes have continued. Notably, he was involved in the 2020 deal bringing Microsoft Corp. to Atlantic Station. Microsoft will take up 523,000 square feet at Atlantic Yards.

“It was a very complicated transaction with a lot of moving parts,” Smith said. T. Dallas Smith & Company was the exclusive tenant broker representing Microsoft.

“Corey was the lead analyst and point guy on that deal. He kept the schedule moving. We couldn’t have executed it at the level we did without Corey.”

In his presentation of the 2020 President’s Award, Atlanta Commercial Board of Realtors President Jeff Pollock said of Ferguson: “When I attended my first Diversity Committee meeting as president this year — we did have a few in person meetings before March — I heard this individual introduce himself to the group, and share some of his life story. I was so moved by his personal and professional journey, as well as his openness and candor. Here was a strong, genuine — and passionate leader. And when our country faced a tightening economy and major civil unrest, I depended on his informed perspective and authentic spirit to help open up meaningful dialogue among so much dissension.

“I hope that this very public recognition of his many contributions inspires him to continue his service and leadership to others,” Pollock, president of Pollock Commercial Real Estate Services, continued. “This is a young man who stands for positive and powerful change — and I think that is something we can all stand up for.”

Smith said he saw Ferguson’s potential after getting to know him around five or six years ago through the Empire Board of Realists.

“We had lunch and he told me some of the things he’d done in the past,” Smith said.

Starting in commercial real estate as an asset manager with Colliers International, Ferguson moved on to work as a senior leasing and property manager with SugarOak Holdings before continuing his career as a corporate real estate specialist with Kimberly-Clark, where his work included international deals.

As he listened to Ferguson speak about his history, Smith said he was impressed with what the younger man had accomplished: “I was sitting there like a deer in headlights,” Smith said.

Smith was eager to have Ferguson join his team, which he did. At the time, the company occupied about 1,500 square feet of space at 101 Marietta St. N.W., where it still operates (now it takes up 5,000 square feet on a different floor.)

“We didn’t have a place for him,” Smith remembered, “but we had an open area in the hallway.” Ferguson brought from home a card table, where he and another colleague sat and went about their tasks.

“Here’s a guy who’s not going to stop,” Smith observed.

Although 2020 has been challenging due to Covid-19, Ferguson has stayed positive about Atlanta commercial real estate and is encouraged for its success in 2021.

The industry “has done well in comparison to some of the other major markets,” Ferguson said. “I’m very excited about movement toward recovery. We look forward to seeing some upward momentum. It’s going to take time, so patience is a virtue.”

“They’ve seen similar things — not pandemic, but fluctuations,” Ferguson said. “They look back at the dotcom era, how there was an adjustment that had to take place because of the aspects of that. Go back to 2008, 2009; I saw the ups and downs, and the course correcting that had to be made.”

An important lasting effect of the coronavirus pandemic is bridging the gap between people who were tech savvy and those who were not, Ferguson said.

“There’s been a marriage of two components — the technology component and the relationship component that have come together organically so we can continue to do business in the middle of this turbulent time,” he added.

“Dr. Martin Luther King Jr. was quoted as saying, ‘The ultimate measure of a man is not where he stands in moments of comfort and convenience, but where he stands at times of challenge and controversy.’