Hit enter to search or ESC to close
TDS&Co NewsUncategorized 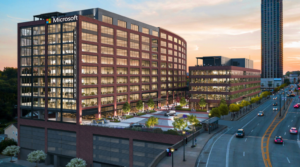 The software and tech giant will occupy 523,000 square feet at Atlantic Yards in Midtown Atlanta. Microsoft will reportedly make a $75 million investment, create 1,500 jobs, and move into the new site by next summer. As of July, the Microsoft deal was the largest corporate lease square footage wise in Georgia and the Southeast region, reports T. Dallas Smith, president and CEO of TDS&Co.

He claims the record-setting pact his firm closed in June was also among the biggest of its type in America since COVID-19 started in March. The news on both fronts is based on findings from CoStar, a global firm that researches commercial real estate market data, Smith says.

Operating in a roughly $9.6 trillion real estate industry, Smith says the Microsoft deal is significant to his business not just as a small independent commercial real estate firm, but a deal this size is significant to anybody in tenant representation. The deal, perhaps, is more stunning given the industry’s anemic diversity status. In fact, Smith says his figures show his industry is made up of only 2% of African Americans in the brokerage sector. However, Smith said his firm is trying to change that percentage by hiring more minorities. His firm now has 16 brokers who are minorities and women.

“This deal further positions us not just as a firm of color but a firm of capability,” Smith says. He noted Microsoft is one of many nationally recognized partnerships his firm is involved with, including FedEx, AT&T, JPMorgan Chase, Coca-Cola Co., and ALSAC-St. Jude among them.

Smith says the firm’s future growth will come from generating more revenue from existing clients and signing fresh leases with new clients. He said the firm also is exploring expanding into facilities management services, something that the firm’s clients have requested in recent years. In the next five years, the firm hopes to have 40 brokers and boosts its client representation by 25%.

Started in 2007, Atlanta-based T. Dallas Smith & Co. has affiliate offices in Dallas, Los Angeles, and Trenton, New Jersey. Smith says the firm has strategic partnerships in almost every state, allowing it to serve clients anywhere in the country. It mainly leases office and industrial space along with land.

BLACK ENTERPRISE touched base with Smith via email and phone to get his take on commercial real estate, his firm, and experience in the business.

Your firm calls itself the nation’s largest African American-owned commercial real estate brokerage firm focused exclusively on tenant and buyer representation. What is that proclamation based on?

This number is based on two factors: headcount and client representation. I have been in the industry for 38 years and I keep track of the numbers. For instance, in Atlanta, known as the Black Mecca, the four largest four firms, including CBRE and Cushman & Wakefield, have a total of just 10 Black brokers. Now, if the Black Mecca represents these dismal numbers, I can rest assured that the other cities are very similar. We are actively looking for companies that look like us as a way to continue our growth, but it continues to be organic growth.

What does your firm expect to do in revenue or transactions this year versus 2019? What do you attribute the growth or decline in business to?

As a privately held company, we do not release specific details regarding our transactions or revenues. We can comfortably share that our partners have collective experience in working on assignments exceeding $15 billion in aggregate value in over 35 states throughout our time in the commercial real estate industry.

How has COVID-19 forced your firm to change how it operates this year? What steps is the firm taking now to help ensure it grows strategically post-pandemic?

The pandemic has challenged all industries to look at business through new lenses. Ours is no exception. We are blessed to have a multigenerational team that has employed a little of the old and new to make sure we put our best effort forward. This means the best technology that allows us to properly research and report through online resources. It also means picking up the phone and talking to our clients more often. Checking in. Listening and hearing the need. Strong relationships are key when being face to face is not an option. Technology and talking!

During your career, you worked with H.J. Russell & Co., the Atlanta-based firm that is among the nation’s largest construction companies. How did the company’s founder, the iconic late Herman J. Russell, influence and prompt you to start your own firm?

I pioneered the brokerage division for Herman J. Russell, affectionately called H.J. I tell people all the time that I earned my Ph.D. from the Russell University.

I started in this business with Atlanta Air Center Realty working for Thomas W. Tift and in 1989 I was the first Black broker at Cushman & Wakefield of Georgia. The first cold call I made at that time was to Herman J. Russell. I had already set my mind to the fact that this could take a while, a man that wealthy and that busy, surely would take a while to get back to me. But to my surprise, Mr. Russell called me back within 15 minutes of my very first call. Years later while I was blogging for the Atlanta Business Chronicle, I asked him why he called me back in such a short time frame. He answered, “Dallas, I had no idea why you were calling me. You might have had a job for me, some money for me, hell I wouldn’t know until I called you back!” That has helped to sharpen my open-door policy. I talk to everybody because of the example H.J. set for me. H.J. also inspired me because even though he’s a man who grew up in Jim Crow Georgia with a speech impediment, he didn’t let that stop him. I have no excuses.

Reportedly only 2% of the brokers in the commercial real estate industry are African Americans? Why are there so few Black brokers in the space? As such, what ongoing challenges has that low representation created for your firm and how has it overcome them?

Based on my own numbers, we are at 2%. It depends on who you ask but I believe that there are two main reasons for that number. As it was told to me by someone who ran a major firm, the two reasons were, “We can’t find any qualified candidates.” and two “We don’t want any.” So, for us the issue of “can’t find any” is an issue of exposure. Therefore, we have taken the stance that we will expose the industry to people who look like us knowing “cream will always rise to the top.” Very few young people of color are regularly exposed to commercial real estate as an option. People wonder why I have an open-door policy, and therefore, I will talk to any young person with a serious interest in commercial real estate. I set aside time once a week for these conversations. It is how TDS&CO was started.

Overcoming the challenges happens when you do just that. Expose young people to the industry. Give them the tools and then allow them unlimited access to those tools. Guide and at the same time, get out of the way.

What steps are you or your firm taking to get more Black brokers into commercial real estate? How would the African American community benefit from more Blacks working in the industry?

We are exposing more young people through our community outreach. Although it’s not mandated, every broker in our firm puts in hours volunteering, serving on boards, speaking and participating in efforts to expose young people to the industry and to show young people of color that this is an option; Black men and women are here and together, we are doing well because we are putting in the work. How will it benefit the African American community? It has been said that commercial real estate has created more millionaires than the NFL, NBA, and MLB combined. With financial freedom, it creates an avenue to help reduce the wealth gap. Additionally, the benefit is in having representation by people who look like you, came from you, and understand you. There is nothing more encouraging for breaking down walls than seeing someone who looks like you on the other side.

You have achieved great accomplishments in your business for nearly four decades. What advice would you give to Black investors who are now considering investing in commercial real estate or young Black professionals considering a career in the field?

First thing I tell them is, you can do this business and do not let anyone tell you that you cannot. To potential investors in commercial real estate, make sure you hire a broker that can represent your interest that is an expert in whatever product type that you are interested in.