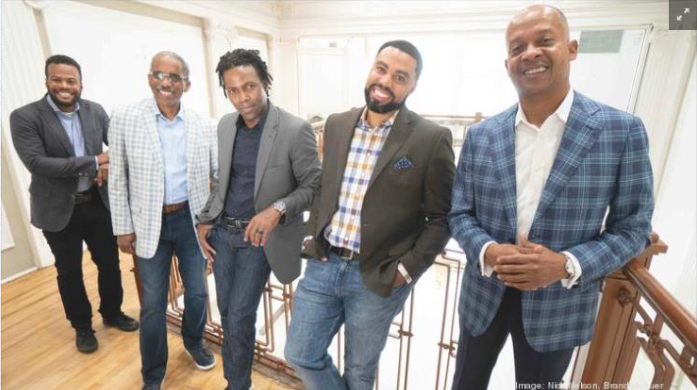 When T. Dallas Smith & Co.’s Cedric Matheny met Microsoft’s Michael Ford at the CoreNet Global Summit in 2017, Matheny had no idea he would be laying the groundwork for one of the biggest deals in his company’s, and Atlanta’s, history.

“The initial meeting was the foundation of a now growing relationship between Microsoft and T. Dallas Smith & Company,” Matheny said.

“The shared core value alignment of respect, integrity and accountability led to a strategic partnership,” Matheny recalled. “They value our team’s deep involvement in the community, commitment to diversity and diverse representation in the real estate industry, as well as our knowledge and investment in the local market.”

In 2019, the technology giant hired TDSC’s Matheny, Smith, Dexter Warrior, Leonte Benton and Corey L. Ferguson to explore leasing 250,000 square feet of office space in Atlanta. Initially, the team was required to keep Microsoft’s identity confidential. They soon landed on Midtown as an ideal location. By the close of 2019, TDSC presented

Microsoft with a list of possible locations, including Hines and Invesco’s Atlantic Yards at 170 and 200 17th Street Northwest.

In May 2020, Microsoft announced it would occupy 523,511 square feet at Atlantic Yards, more than double the space of its original plan. This made the deal Atlanta’s largest office lease in 2020 and the winner of the Atlanta Commercial Board of Realtors Alvin B. Cates Award for Outstanding Transaction of the Year.

“Fortunately, Microsoft did not allow any [pandemic] challenges to impede the project partially because they knew the long-term positive impact it would have on the community,” said Warrior, TDSC principal and COO. “The transaction was in advance stages prior to the pandemic, so no real modifications were necessary.”

Last month, Microsoft announced that in addition to Atlantic Yards, the company would be purchasing 90 acres of land (in a 70-acre and a 20-acre parcel) at Quarry Yards and Quarry Hills, in the Grove Park neighborhood, to house a future campus.

“These are all significant investments and put Atlanta on the path toward becoming one of Microsoft’s largest hubs in the United States in the coming decade, after Puget Sound and Silicon Valley,” Brad Smith, Microsoft president, said in the announcement.

Microsoft revealed plans in its announcement to improve the Grove Park neighborhood amenities, include affordable housing in their development, and partner with the community to make infrastructure improvements in the area.

TDSC’s role in the deal was crucial, according to Heather Lamb, senior vice president at Colliers International and member of the Cates Award committee.

“T. Dallas Smith and Company advised Microsoft on the real estate strategy behind this endeavor,” she said. [The company] “not only secured the initial office component at Atlantic Yards but negotiated the two land sales on behalf of Microsoft, to allow Microsoft to execute on their East Coast job growth plans.”