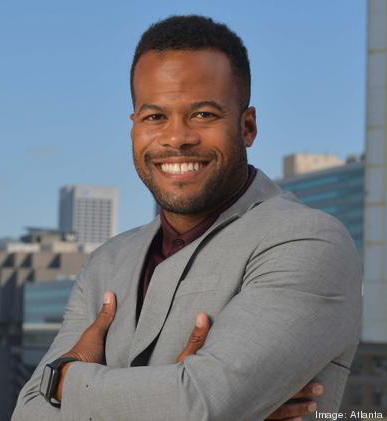 T. Dallas Smith & Co.’s new president Leonte Benton had an unconventional way of getting his foot through the door.

Before he got his start in real estate, Benton sent hundreds of letters to real estate professionals and heads of industry, like Chick-fil-A founder S. Truett Cathy, developers and entrepreneurs Herman J. Russell and Tom Cousins, or even the Berkshire Hathaway CEO Warren Buffett, he said.

“I would ride past office buildings. Whatever name I saw on the side, I would send them a letter,” Benton said. “One thing led to another.”

It was only natural that Benton would work his way to the top of one of Atlanta’s most prominent brokerage firms.

In late August, Benton began his role at T. Dallas Smith & Co. He follows the company’s namesake, founder, T. Dallas Smith, who has stepped down from the role but will remain as CEO. Benton is now one of the youngest Black men to sit at the helm of a real estate brokerage firm in the U.S.

What led you to your career?

I’ve always had a fascination with big buildings as a kid. I grew up in an economically challenged environment. To me, when I would see big buildings, it always symbolized wealth and a path out for me. It was something that piqued my interest at a young age.

Who was your biggest influence in your career?

My high school English teacher Mr. Mays was the first person who gave me hands-on experience in commercial real estate. He owned a bunch of apartment buildings that were eight or 12 units. He allowed me to come help him on the weekends. Also, Coach Braco at my high school was the first person I’ve ever heard use the term commercial real estate, which sparked something in me.

What is the biggest challenge in your career or job?

My mom raised me in such a way to look at challenges as opportunities. My biggest challenge right now is hiring and retaining women. I’m proud to say we have a strong team of women now, but I’m looking forward to seeing that number grow. The women in our office are absolutely amazing and absolute beasts. If we could get 100 more females in the office with the same energy, spirit and work ethic, as a collective, we’ll be more than OK.

What’s the most rewarding part of your job?

To see a young person come in who may not have known anything about real estate and work the process to close their first deal. A light switch comes on. It hits on what the mission [of the company] is, to see these young guys and gals make money and be a good steward of these funds, and take care of their families and communities.

To keep your foot on the gas and continue to build off of those before you. It’s also to put people first and be intentional about everything you do. Your relationships are everything. A lot of the guys early on are trying to run-and-gun and make money. But actually taking the time to get to know people in the industry and the Atlanta community in a genuine, authentic way is [important]. Don’t treat a transaction just like it’s for economic gain, but like it’s for your best friend or your grandmother.

How did you first meet T. Dallas Smith?

I met him through the Empire Board of Realtists, a Black real estate trade organization based in Atlanta. I was invited to a scholarship gala in November 2006 where I met Brian Jordan, who used to play for the Atlanta Braves and Atlanta Falcons. I introduced myself and told him that I was working to get into the industry. He later introduced me to Dallas. When I first met Dallas, he asked me if I had my real estate license. I didn’t. He told me to get my license and to come back. So I locked myself in a room for three weeks and got my real estate license. I came back excited. I said “Mr. Smith, I got my license!” And he started laughing. He had a look of confusion on his face. He said, “Frankly, I’ve told at least 50 people to get their license in the past, and no one has ever come back.” That was his way of getting rid of people.

How has the commercial real estate ecosystem evolved from when you first began with the company to now?

From the last number I saw, there’s still less than 2% women and minorities in the industry. But outside of the diversity issue, there’s been some changes as it relates to technology and how companies use space. A good number of our clients have begun to use more of a collaborative concept versus what it was when I first started in the business, where I feel like most offices were heavy office use. Now, people are focused on making sure that their office space is heavily amenitized so they can attract and retain talent.

What is the deal that you are the most proud of?

They all have their own life and meaning in the ways they have impacted us. One of the first deals of significance that we completed was with Gude Management Group in 2008 or 2009. That was a significant deal [10,000 square feet] that Mr. Smith and I did together. From that deal, a couple of others came and gave us the foundation to keep going and to build what we have today.

When you and T. Dallas Smith were first starting to form the company, did you expect Atlanta to grow this rapidly a decade into the future?

We felt like Atlanta had all the infrastructure in place to become what it’s become today. I still feel like we’re in the infancy stages. I’m a native Atlantan. Just to see the growth and how far we’ve come, it has been just a joy to see and a joy to be a part of, especially seeing how the quality of life has improved in the city. We still have a ways to go because we still have issues like affordable housing, and issues centered around crime.