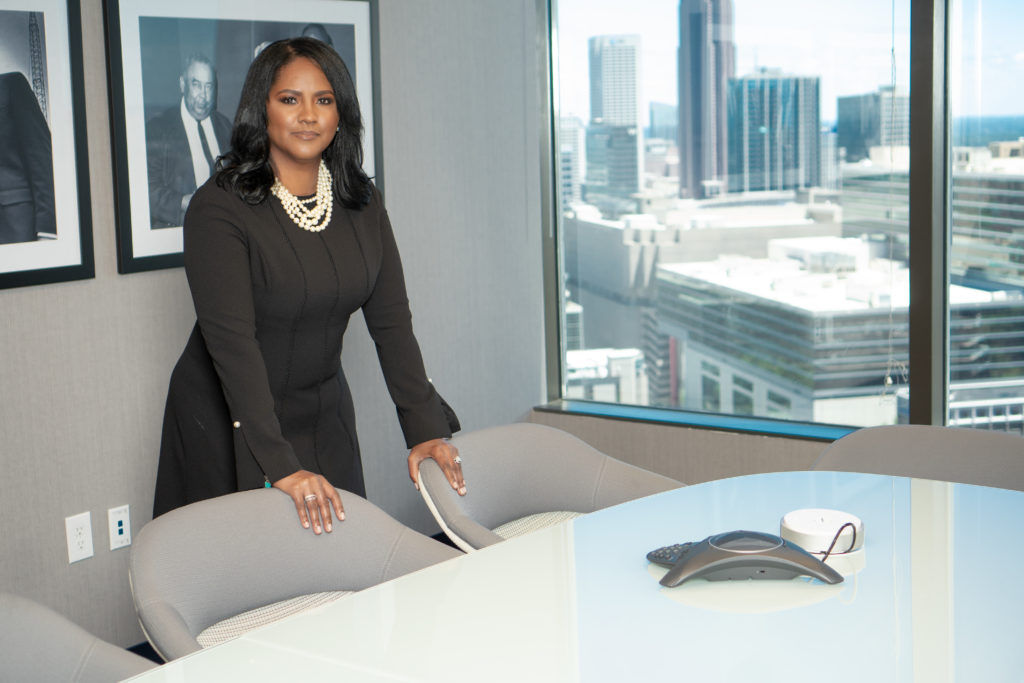 As a Black woman working at a commercial real estate brokerage, Audra Cunningham is used to breaking barriers.

A decade ago, when she took a job as an office tenant representative for Jones Lang LaSalle in Washington, D.C., Cunningham said she was one of the few, if not only, Black women in that role in the region.

This summer, Cunningham did it again when she became the first female to join the C-suite of T. Dallas Smith & Co., the largest Black-owned commercial real estate services firm focused on tenant and buyer representation. Last month, the Atlanta-based firm named Cunningham its chief administrative officer.

“I feel like my experiences over the past 12 years have given me the tools I need to help Dallas and the company grow and recruit and develop talent,” Cunningham said in an interview.

Cunningham’s talent, strong voice and ability to build alliance in the community make her a key addition to the company, said founder and CEO Dallas Smith. “She will certainly blaze trails for women and minorities with the desire to pursue careers in commercial real estate,” Smith said in a statement.

Dallas Smith has 19 brokers and is seeking more, especially those who have some experience but have not reached a senior level in the business, Cunningham said. The firm made a big splash when it represented giant software company Microsoft in its 523,000-square-foot lease in a pair of buildings at Atlantic Yards in Atlanta. The Microsoft lease that covers two buildings under construction is the largest to be completed in the United States during the coronavirus pandemic, according to CoStar data.

She did that after working for several years in telecom sales.

Cunningham said she first grew interested in commercial real estate after she had a chance meeting in 1993 with John Dewberry, a high-profile Atlanta developer who in the 1990s acquired key tracts in Midtown long before it was the city’s top office market.

Dewberry liked Cunningham and offered her a job at what now is development and investment firm Dewberry Group. Ultimately, Cunningham decided to stay where she was, but she watched “Dewberry buy up Midtown,” and that made a big impact on her, she said.

Cunningham began reading books about how to succeed in commercial real estate and took investment classes in addition to attending industry events, even though “everybody had the name of their company on their name tag except for me.”

It was at one of those events where Cunningham met Atlanta commercial real estate veteran Cynthia Robinson Alexander, who recommended she meet with James Pitts, who at the time was a broker at Grubb & Ellis.

Pitts introduced Cunningham to Steve Dils, who ran Grubb & Ellis’ Atlanta office at the time. Dils, who now runs Avison Young’s Atlanta office, encouraged her to pursue her desire to become a broker, and he hired her as a tenant representative in 2008.

“I wanted to be a broker. I didn’t want to feel like an experiment,” Cunningham said. “I knew that if we were about to get a Black president, then why couldn’t I be a broker?”

It wasn’t easy at first. When she joined JLL in 2010 and commuted weekly between Washington and her home in Atlanta, “I contemplated getting out because I wasn’t making any money,” she said. Cunningham was working in an unfamiliar city without a wide network of contacts.

“I had most of the issues that most other brokers have when you’re an outsider and didn’t go to school with or weren’t neighbors with or on boards with people who owned companies,” she said.

She ultimately found success and began moving up the ranks. She connected with Dallas Smith and T. Dallas Smith Chief Operating Officer Dexter Warrior at the reunion of a race awareness group focused on diversity in commercial real estate. The three of them met early this year, “and after a two-hour lunch, the decision was made in my mind” to join the firm, Cunningham said.

Her real estate career has made uprooting her children from New London, Connecticut, to move to Atlanta in 1993 well worth it, Cunningham said. She expected that Atlanta, a more diverse city than New London, would offer her children more opportunities as well.

“I wanted to raise my children here so they could see people who looked like them in leadership roles,” she said. “They definitely appreciate the opportunity that Atlanta has afforded them.”

As for Cunningham, she said “it is very cool” to break another barrier in the business. “I am walking proof that you don’t have to grow up in real estate to be a broker.”

Cunningham’s first month at T. Dallas Smith “has been amazing,” Cunningham said, “though I wish we all were in the office.” She’s there on alternating days during the pandemic.

“I love what I do, and I am doing it with people I love,” Cunningham said.