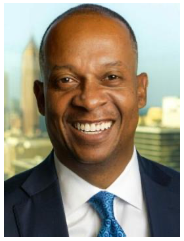 Location has long been the North Star for real estate developers, but that age-old maxim has evolved into a sometimes racist approach to site selection, according to the CEO of T. Dallas Smith & Co., the largest African American- owned buyer- and tenant-focused broker in the country.

Atlanta-based T. Dallas Smith & Co. is named after its President and CEO T. Dallas Smith, who discussed racism as part of a broad conversation with Law360 about what he’s seen in real estate over the past year and the impact of the COVID-19 pandemic.

Earlier this month, Microsoft and Georgia politicians announced preliminary plans for the tech company’s development of 90 acres near Grove Park, a historically Black neighborhood on the west side of Atlanta. Microsoft said it will only develop three-quarters of the property for corporate use and will build affordable housing and make other investments in the community across the remaining quarter. Eversheds Sutherland helped Microsoft with the recent purchase.

T. Dallas Smith & Co. has additional offices in Trenton, New Jersey, Dallas and Los Angeles, and has done more than $15 billion in aggregate sales and lease deals since its founding in 2007.

This conversation has been edited for length and clarity.

We are nearing the one-year anniversary of the World Health Organization declaring COVID-19 a pandemic. What are some of the key changes you’ve seen in your line of work over the last year?

One of the biggest impacts is not seeing my colleagues as much as I used to, which I think has been the biggest impact of having to work remotely. Our team is very much family- oriented. Right now you may have four meetings or a team call scheduled [with] an agenda. But you may have 15 different unofficial meetings take place. You’re just covering a whole lot more. So you have to be very intentional, making sure you write down everything that you think about. You need to talk to this colleague about this, that colleague about that. This used to happen very organically at the office. That’s been the biggest thing.

There’s been a lot made of the move to virtual work as a result of the pandemic. Some people say it’s been more challenging, and some people say there have been synergies realized because it’s easier to get hold of people. What’s been your experience?

It’s 50-50. … A lot more planning has to take place, which is kind of difficult for a guy like me. But I think for those who have been very structured their entire lives, this is a breath of fresh air for them. … I just have not been that type of person, so it’s a little bit more complicated for me. I’ve got to be extra intentional. We’re making it work, but to your point, it’s been a year. We’re making it work because we’re having to make it work, but I miss meetings where you actually meet with people. I miss traveling to see sites or meet with a potential client about something.

My old boss … used to say, “You can’t buy real estate over the phone. You’ve got to walk it. You’ve got to see it.” When you’re doing acquisitions for clients, it’s still very helpful to get to that site and have a look at the property, to see what you’re getting ready to buy, all of that. That’s been a little bit more challenging in today’s climate.

I wanted to ask you about a couple of asset classes that your company does work in: office and industrial. Industrial has done quite well during the pandemic due to e-commerce; office, maybe a different story. What have you seen in terms of those two asset classes over the last year?

You’re absolutely right. Industrial has just been knocking it out of the park. One of the other things about being at home is the number of knocks at the door from Amazon. You’re at home and you’ve got all this extra time to be buying stuff you really don’t need. You have all these boxes being delivered, so those boxes are coming out of these warehouses, and you’re just seeing more and more of that. So I think industrial is going to continue to do more as people continue to stay home and get used to buying things online. I think it’s become just a norm.

But as it relates to office, I think we’re going to see a couple of things. Companies that have been strong are just going to become stronger. … And you see a lot of that happening across the board with companies that have a long-term view. So from that perspective, you’ll continue to see that type of client in particular grow. And then there’s others who may be more structured and more tailored and realize that, hey, the way that [we] operate, the way that [we] move, the way that [we] work, being online can work just as well, and maybe we don’t need an office. And I think you’ll see some of that.

But I think at the end of the day, the weak will get weaker and the strong will get stronger. So you’re going to have a lot of shadow space out here where somebody signs a lease but doesn’t move into it and they’re going to try to sublease it. Which means ultimately, for guys like me who do tenant representation, there are going to be some deals out here available at some point for the right tenant to come in and take a space with not that many modifications. … So, I think you’re going to see both of those things happen.

I’m seeing sublease space coming. I wouldn’t say a lot of it, but I’m always concerned about the underlying support. So I tell people all the time, the sublease is only as good as the person who has it. So if, for instance, Bank of America is on the hook for sublease space … my client [would be very comfortable] that they would be a good sublandlord, because you know they’d still be paying their bills.

But what you don’t want to happen is have somebody who is a weaker sublandlord come in and you sublease from them, and then they’re not paying the bills. And then you’re getting kicked out because a sublandlord was not paying the landlord. I’ve seen that once in my life, and that’s a bad day for the person that you put into that space. So as long as the sublandlord is extremely supportive of the sublease space or there’s some sort of backstop with the landlord themselves, it’s something to look at. I’m always cautious when it comes to sublease space. Again, you know, once burned, twice shy.

You’re based in Atlanta. Do you have specific thoughts on the Atlanta market, whether it’s office or industrial? Or on the sublease question?

I think you’ll continue to see Atlanta do well in all sectors. And you’ve got a lot of companies who are coming from other places like New York or San Francisco where things have gotten extremely expensive. And it’s harder to do business in cities that closed down due to COVID. They had to pivot one way or the other. If I’m going to stay in business, I’ve got to move somewhere that’s still open, and Georgia has become the benefactor of that. The stance that the governor took early on has been the difference between keeping businesses open.

People still have to make a living. You can’t just shelter in place forever, particularly if you own a business. It’s tough enough out here. So I’m seeing a lot of that. Folks from New York have moved here in a big way, as well as people from the West Coast — again, cities that have closed down. We’re getting those calls from companies looking to start a new life in Georgia.

I know your company also does land deals, and I’m curious what you’re seeing there. One thing that may be happening is that companies are buying land and sitting on it and waiting until the pandemic passes, until they figure out what exactly they want to build. What are you seeing?

How do you see the next six months playing out in terms of commercial real estate?

I think you’ll start seeing a little bit of daylight, particularly as the vaccine rolls out and starts proving to be effective. You know, people will start getting comfortable, coming out again. I mean, a lot of people are starting to adhere to the double mask thing. Most of [the people] I see in Atlanta, are covered up, they’re wearing a mask, they’re socially distancing themselves, they’re washing their hands frequently. I think that’s just kind of the wave of the future. You see the stats in terms of how low just the seasonal flu is. It’s a record low. Well, everybody’s wearing masks. Everybody’s washing their hands. So I think it’s just going to become a way of life. An abundance of caution.

I just found out at a buddy of mine, a friend of ours, passed from COVID. It’s tough to hear. Some people are getting over it, but others are not. We’ve got almost a half million people who have passed from the disease. … Now’s obviously the time for us to be cautious. I can’t tell you how many times I’ve been tested because I go to an event or something and somebody from that event tested positive. Thank God every time I’ve tested I’ve come back with a negative. But, again, I don’t think there’s anything strange about that. Sure, I was in that building. I may have been next to that person, but I want to get the green light that, OK, I’m OK. And again, I think that’s something else that will just become normal. You’ll go get tested. Oh OK, I’m good this week. Hopefully I’ll make it another week and I’ll just continue to move on.

I’m very sorry for your loss.

Literally I just found out about it right before you called. … He was a fine gentleman. Just a good guy. A great real estate guy who’s been around a long time. And he’ll be missed.

It will look like 1980. What I mean by that — I got into the real estate business in 1982, and in 1982, the average per square foot of office space per user was somewhere around 300 square feet. So I mean, that’s when it was the era of everything was bigger, right? So, just put it into this perspective. You’ve got 10 people in your office and you have 3,000 square feet, right? And then we saw everything get smaller because of collaborative space. We saw it get down as low as 115 square feet per person. … But I think what you’re going to see is a return back to larger allocation per square foot per body. Again, I think we’re going to see 1980 maybe all over again.